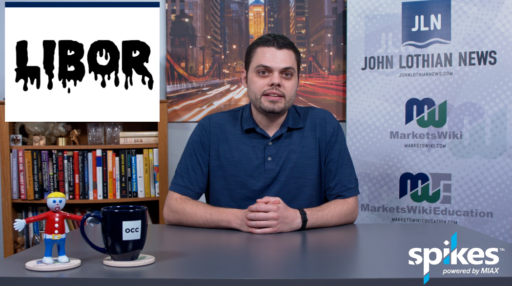 In this episode of “The Spread,” we look at the history of the LIBOR, a financial innovation that grew to underpin trillions of dollars of derivatives contracts before becoming the centerpiece of one of the largest financial scandals of our time.

Volatility Isn’t Just for Stocks Anymore
Gunjan Banerji – WSJ (SUBSCRIPTION)
Swings across asset classes have mounted in recent days, flashing a warning sign for the stock market.
Fluctuations in oil, bond and currency markets have jumped this month amid trade tensions between the U.S. and China and fears of slowing economic growth. U.S. stocks stabilized in recent days after a bumpy start to last week, but investors are bracing for continued turbulence across markets.
/on.wsj.com/31ASkZf

Argentine Assets Tumble After Macri Routed in Surprise Vote
Sydney Maki and Alexander Nicholson – Bloomberg (SUBSCRIPTION)
Argentina assets tanked on Monday, setting new records after a populist opposition candidate routed President Mauricio Macri in a shock primary election result.
The currency tumbled 25% to a new low of 60 per dollar on thin trading, signaling the brunt of the impact of the vote may still be ahead. The nation’s offshore notes collapsed, with the country’s 100-year bonds down almost 26% in New York to 55.15 cents on the dollar. An exchange-traded fund of Argentina stocks tumbled 24% in New York. Bond risk measured by five-year credit default swaps surged by 10.64 percentage points, signaling an implied probability of default of about 75%.
/bloom.bg/31CPUsX

S.Korea watching FX market for possible need to ease volatility
Reuters
South Korea does not target a specific level for the won but is closely watching the market as there may arise a need for the authorities to help ease increased volatility, the country’s finance minister said on Monday.
/reut.rs/31wHjbo

Eurex Exchange – Equity Index Highlights
Eurex
Global equity markets generally drifted for most of July before finishing weakly. The focus recently has been towards the extraordinary fixed income landscape that sees new records on the notional of negative yielding debt. This not only spans government debt and investment grade credit but also some corners of the ‘high-yield’ universe. It’s clear irony, but also a worrying distortion brought about by years of accommodative central bank policy.
bit.ly/2YFJuwl

IEX adopts first fee structure for extra connectivity
Hayley McDowell – The Trade
Investors Exchange (IEX) has said it will soon introduce market access charges for the first time on its most active trading members.
The exchange group’s chief executive and co-founder, Brad Katsuyama, said in a statement on social media that a new fee structure will be implemented later this year for a small subset of highly active clients that use extra ‘logical ports’.
bit.ly/2YIBhHJ

August volatility persists, S&P 500 vies to sustain bullish reversal
Michael Ashbaugh – MarketWatch
U.S. stocks are back on the defensive early Monday, pressured at least partly amid concerns over escalating Hong Kong unrest.
Against this backdrop, the S&P 500 has thus far sustained a bullish reversal from the August low, notching consecutive closes atop the breakdown point (2,912) amid persistent market volatility.
/on.mktw.net/31yl30F

3 Signs Volatility Has Peaked
Todd Salamone – Schaeffer’s Investment Research
In last Monday’s trading, the SPDR S&P 500 ETF (SPY – 291.62) dropped below the 290 strike, coincident the round 2,900 century mark on the S&P 500 Index (SPX – 2,918.65), and by day’s end found itself bottoming just above the 280 strike. While option-related, delta-hedge selling was not at work, there were clearly other sellers looking to quickly exit the market. Suffice it to say that it could have been worse, as put open interest “magnets” below the 280 strike in the soon-to-expire standard August series are bigger than those below the 290 strike, implying an intraday break of the 280 strike could have led to delta-hedge selling.
bit.ly/31F6mJz