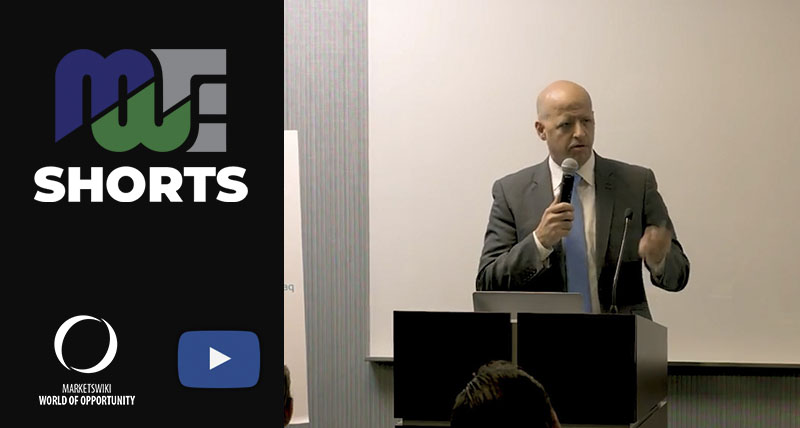 In this video from MarketsWiki Education’s Intern Recruiting Event in Chicago, Chip Dempsey, chief commercial officer at OCC, discusses cryptocurrencies and what effect they’ll have on markets. Dempsey says that the emergence of cryptocurrencies is the beginning of a new age in finance and using a shared ledger has enormous cost control implications.

Wall Street Is Really, Really Bearish Right Now
Gunjan Banerji – WSJ
Wall Street pros have rarely been this gloomy about the stock market.
Net bearish positions tied to stock futures recently touched the highest level of the past decade this year, according to Deutsche Bank data.
Asset managers and leveraged funds such as hedge funds have pared some of those bets lately, but they are far from bullish on stocks.
/jlne.ws/3unnML7

Improbable bets on break of Hong Kong dollar peg adding up
Tom Westbrook and Georgina Lee – Reuters
It’s what is known in the markets as a “tail risk”: a highly unlikely scenario in which Hong Kong’s currency peg suddenly snaps. Yet market pricing suggests bets on such a shock are building in the hedge fund world, and some traders say it makes a lot of sense.
Billionaire money manager Bill Ackman went public last month with his wager that the days of the Hong Kong dollar’s 39-year-old peg to the U.S. dollar are numbered.
/jlne.ws/3XW24vd

Dow skids over 550 points as strong data adds to worry Fed will need to be more aggressive
Vivien Lou Chen and Joseph Adinolfi – MarketWatch
U.S. stocks tumbled Monday afternoon as a hotter-than-expected reading on the U.S. services sector added to concerns that the Federal Reserve might need to be even more aggressive in its battle against inflation, despite concerns about a looming recession.
/jlne.ws/3FoBnXJ

Global Debt: The $65 Trillion Hidden Leverage Bomb Waiting to Explode
Paul J. Davies – Bloomberg
Sixty-five trillion dollars is a not big number: It’s a huge, barely comprehensible number. It’s more than 2 1/2 times the size of the entire US Treasury market, the world’s biggest. It’s 14% of the value of all financial assets globally, according to a tally from the Bank for International Settlements.
/jlne.ws/3XZSkzR

Fed’s 200 Basis Point Rate Cut a Potential Surprise in 2023: Standard Chartered
George Glover – Markets Insider
The Federal Reserve slashing interest rates by 200 basis points and oil prices crashing by more than 50% are among potential economic and financial surprises that could roil markets next year, according to Standard Chartered.
In a report published Sunday, strategists at the UK bank listed eight potential upsets — currently underpriced by markets — that could spark further volatility in stocks, bonds and cryptocurrencies, all of which are on track to post significant losses in 2022.
/jlne.ws/3XShsc1

The Fed Could Raise Rates Above 5% and Leave Them There: Bridgewater
Phil Rosen – Business Insider
Many investors are forecasting the Federal Reserve to begin easing its interest rate hike campaign soon, but Rebecca Patterson, Bridgewater’s chief investment strategist, says there’s a chance the Fed surprises markets and keeps rates elevated for an extended stretch of time.
“What’s not priced in is the Fed going high, and holding,” Patterson told Bloomberg on Monday. “The market’s anticipating right now that we get significant rate cuts starting in the second half of next year, and we think without severe economic weakness to justify that, we’re going to get the Fed pausing, but not cutting.”
/jlne.ws/3HdipFY

There is no alternative to alternative assets
Elif Aktug – Financial Times
What alternatives do investors have in a crisis? Public markets are suffering their worst pummelling in a generation or more. In such broad turmoil, private markets offer a compelling investment.
This is a path that comes with its own perils given the real risks in democratising private markets for retail investors.
/jlne.ws/3FrDye0

Nasdaq Completes Migration of First US Options Market to AWS
MarketsMedia
Nasdaq announced it has successfully completed the migration of the core trading system of Nasdaq MRX – one of its six U.S. options exchanges – to Amazon Web Services (AWS). The completed migration marks a major milestone in Nasdaq’s journey to build the next-generation technology infrastructure for the world’s capital markets. The new cloud-enabled system, which uses AWS Outposts, continues to deliver a low double-digit microseconds latency for end-to-end and order-to-trade processes, in addition to a 10% performance improvement in round trip latency.
/jlne.ws/3XRbsA6

Embattled KuCoin CEO defends high-yield product, hires accountants to verify reserves
Leo Schwartz – Fortune
The current Crypto Winter is littered with the corpses of companies that rose to prominence by offering risky products, from margin trading on FTX to so-called “earn” rewards on Celsius. In the aftermath of FTX’s bankruptcy, crypto watchers on Twitter set their sights on to KuCoin, the world’s fourth-largest exchange by trading volume. Critics spotted a potential time bomb in the form of KuCoin’s complex options product called “dual investment,” which let customers earn interest rates as high as 300% for depositing cryptocurrencies.
/jlne.ws/3usmWwG

FTX’s LedgerX Up for Sale as Restructuring Process Picks Up
Gillian Tan, Lydia Beyoud and Allyson Versprille – Bloomberg
LedgerX, one of the few solvent pieces of Sam Bankman-Fried’s crumbled FTX empire, is for sale and attracting interest from would-be buyers including crypto giants Blockchain.com and Gemini, according to people familiar with the matter. The unit, which is registered with the US Commodity Futures Trading Commission as a derivatives exchange, was a cornerstone of Bankman-Fried’s efforts in Washington. It’s also considered one of the most valuable assets associated with FTX after more than 100 other entities filed for bankruptcy.
/jlne.ws/3gXf0QT

How to Right-size Hedges Via Beta Weighting with XSP Options
Derek Moore and Jay Pestrichelli – Cboe
To hedge a portfolio of individual stocks, notional value alone may not tell the whole story.
Index options are a good way to protect your investments, but how much should you use? Will they be enough? The challenge is understanding the relationship between how much your positions will move for every corresponding move in the S&P 500 Index (SPX™).
The Cboe Mini-SPX Index options contract, known by its symbol XSP, allows right-sizing given its lower notional values.
/jlne.ws/3H9XwLN

This long-time bear warns of a ‘trapdoor’ situation looming for the stock market.
Barbara Kollmeyer – MarketWatch
Uncertainty is lingering for investors following a recent mixed batch of data — softer-than-expected inflation, stronger-than-anticipated jobs and wages — as we kick off the third week before Christmas.
That’s as we wind down a year that just hasn’t been great for most investors at all. Feeling your pain a bit is Hussman Investment Trust president and long-time bear in residence, John Hussman, who says investors are facing a “trap door” type situation with stocks right now.
/jlne.ws/3gYHZ6W

World Cup Wins Deepen Currency Pain for Football Fans
Ronojoy Mazumdar and Hooyeon Kim – Bloomberg
Football fans who traveled to Qatar knew the World Cup experience wouldn’t come cheap, but the resilience of the Gulf nation’s currency is making the trip particularly painful for travelers from South Korea, Japan and England.
Everything from hotel bills to the price of Coca-Cola at the stadium are pinching tourists, who in many instances are already dealing with sky-high inflation in their home countries.
/jlne.ws/3iGWsof